Prime95 is also known as Great Internet Mersenne Prime Search (GIMPS). It is a tool to find World Record Primes. However, it can be used as CPU torture tool as well. It is a great tool to stress your CPU because the torture test will use up all your CPU core and 100% CPU utilization. Who want to torture his own CPU anyway? Overclocker like me will need it. Besides this tool, I also use SpeedFan to monitor CPU temperature and CPU-Z for CPU core speed and bus speed.

As I said, overclocker needs this tool. I use it to test my CPU stability on certain speed that I overclock. For example, my Intel Core2 Extreme quad-core processor QX9650 has default 3 GHz core speed. I would like to overclock to the maximum speed that CPU can support. You cannot find out with playing extreme games only because the games that you play might not use up all the cores and not 100% utilization. But Prime95 does.

By using Prime95, my Intel Core2 Extreme quad-core processor QX9650 found its best speed at 3.8GHz with Cooler Master Geminii S (風神鍛) CPU Cooler. However, it hit a little bit above 70 C temp which I don’t really like. In the end, this CPU stays at 3.6Ghz at around 65 C temp max.

What is your CPU max speed? And it is hot? 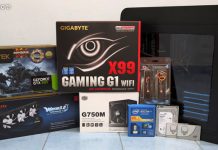 How to undervolt Galaxy S4 CPU?

How to overclock Galaxy S4 CPU?

How to undervolt Nexus 4 CPU?

How to overclock Nexus 4 CPU?